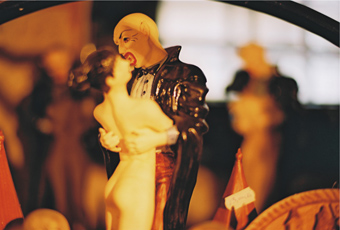 He’s the most famous vampire in the world. When Bram Stoker wrote Dracula in 1897, people in Romania didn’t think much about their former ruler Vlad Tepes (Count Dracula, b. 1431). But when the book became world-famous, the locals were quick to turn the myth into an industry and tourist attraction.
Romania may be the most God-forsaken and God-fearing country in Europe. Countless slogans abound, like “Blood is the only true life” and “There are many vampires sucking the world dry, but Romania had the first”. Where the villages are empty and the graveyards are full, where nature is wild, rugged and beautiful.

The filmmaker takes us on an entertaining jaunt through the impoverished, pristine country which almost pines for a strong leader like Vlad the Impaler, ravished by corruption and intractable problems as it is – infamous dictator Nicolae Ceausescu even fancied himself in the tradition of Vlad. A mythic, mirthful, melancholy meandering through Transylvania, the land beyond the woods which dares to ask the question: Was Dracula one of the good guys?