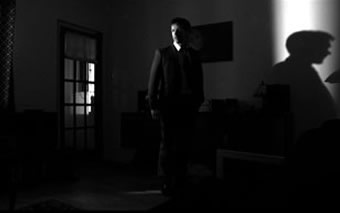 David Wright’s emotional torment prevents him from functioning as a therapist. The woman he loved vanished from his life. Now Rene Maurer, one of his regular patients, has died – an apparent suicide. Disillusioned, he questions the reasoning behind trying to help people to be happy in a world full of pain and suffering. Another patient, Karl – a depressed physicist – tells him about a thought experiment called “Quantum Suicide” which – if true – has deep implications for the conscious mind. Their therapist-patient roles become reversed, as Karl provokes David into an emotional outburst.

Then Rene’s sister Erika, arriving in London to sort out his things, discovers something curious – his apartment is almost empty. A cup, a spoon, a fork, a knife, frames without pictures, torn photos. One more curiosity – a list of memories. Four dated descriptions of moments in Rene’s life. David meets Erika as she tries to understand what drove her brother to take his own life, and the two damaged souls look to each other for some kind of comfort.

During a therapy session, a patient named Helen walks out, cryptically claiming David has killed “the bad me”. When Helen is the next to die, leaving behind another list of memories, David’s reality begins to unravel as he becomes drawn into an obsessive investigation.