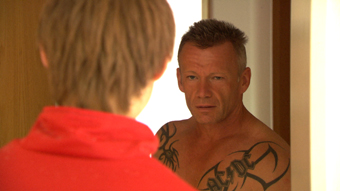 Seven young Austrians, two Germans and a Hungarian woman are out and about in the Bavarian provinces – they are paid recruitment members of the Order of Malta. What looks like a holiday camp is in fact hard labor. Every morning out into the field, go, go, go. They ring hundreds of doorbells and try, countless times, to appeal to people’s social conscience. They are paid based on their success. No new recruits means no money. It’s a game of winners and losers. Some give up, other’s become professional charity salesmen.