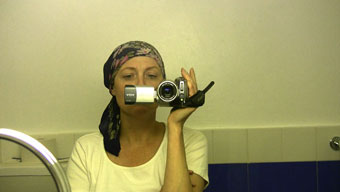 Frederike discovers a lump in her breast. Her gynecologist is completely booked out and the assistant sends her away. When she finally does get an appointment, the diagnosis is breast cancer.

Instead of familiar daily routines, now doctor’s appointments, chemotherapy and operations form the basis of her life. Within the heteronomy of the illness, strategies must be found to keep the threat at bay. For Frederike, this is found on the theater stage, for Marijana Gavric, in the driver’s seat of her tram.

Equipped with cameras, they film their everyday lives and, as a result, determine not only the degree of intensity, directness and discretion in the film, but they also achieve a special authenticity.

An unusual developing process results in an extraordinary film, which Frederike and Marijana form themselves.