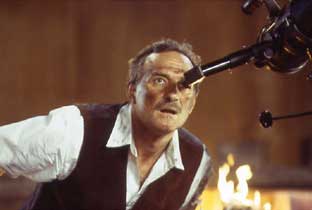 Belgrade, April 1999. The NATO embargo has cut the Serb capital off from the rest of the world. US spy planes buzz overhead. The black market is booming. One of its kingpins is Lubi, who lives with his sister, Dusha, her daughter and their “Granny” in a rundown house. Lubi gripes constantly about the government, the Americans, the neighbour’s dog and even his sister. In normal times, he’d seem crazy, but what’s normal in Belgrade these days?

Dusha fantasizes that one of the American pilots might take notice of her and take her to America, the country of her dreams. Lubi’s attitude being somewhat different, he takes a Russian missile launcher acquired from the black market and shoots down one of the detested AWACS. The pilot parachutes straight onto the roof of their house. Dusha’s dream seems to be coming true, especially since the man is a spitting image of Robert Redford. But the pilot views the situation differently, and Lubi, too, has other things in mind with him than his sister …