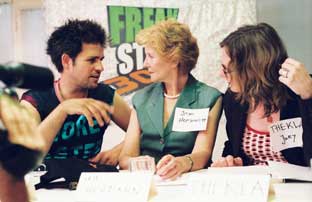 FREAKSTARS go Hollywood! First the controversial magazine for the handicapped, FREAKSTARS 3OOO on VIVA / VIVA Plus, now the movie: FREAKFILM 3OOO. It shows highlights as well as unused material from the most successful programme VIVA ever transmitted. With FREAKFILM 3OOO, Christoph Schlingensief (idea and book) also returns to his first love – the German post-war movies.

In April 2002, director Hans-Joachim Paczensky, based on an idea of Christoph Schlingensief’s, launches a TV project that aims to involve mentally and physically handicapped in the creative process of TV making. More than that, even – they take charge of a project unequalled in the history of (German) television. After shooting in April and May, FREAKSTARS 3OOO – a cooperation of ROYAL Produktion Berlin with the Volksbühne at the Rosa-Luxemburg-Platz on behalf of VIVA / VIVA Plus – launches on June 8th. The 6-part series earns the young people’s music channel unheard-of ratings and triggers a discussion on the ordinariness of disability which also makes nightmares come true.