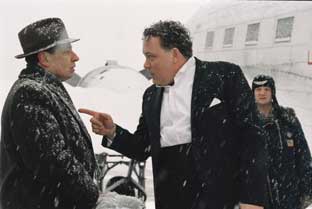 During the post-war period, experts of house and home found out that simply by organizing the kitchen’s work stations properly, based on the assembly-line layout of factories, the financial benefits for a household could be enormous. Or, as a Swedish ad for the new ideal kitchen put it: Instead of a housewife having to walk the equivalent of Sweden-Congo during a year of cooking, she now only needed to walk to northern Italy in order to get food on the table.

After thoroughly mapping the Swedish housewife’s behaviour in the kitchen, scientists at the Home Research Institute in Sweden feel ready to venture beyond their own geographic and gender-based limitations. In the early ‘50s they send 18 observers to the rural district of Landstad, Norway, with its surplus of bachelors, to study the kitchen routines of single men.

In order to be on 24-hour-call, the observers will live in egg-shaped campers outside each subject’s house. From high, custom-made observation chairs strategically placed in each kitchen, few activities will escape this new science. The observers must be allowed to come and go as they please, and under no circumstances must they be spoken to or included in kitchen activities …