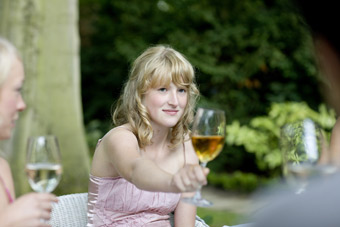 14-year-old Nora lives with her parents, Uwe and Anette, in a quiet Berlin suburb. Introvert and romantic, she tends to withdraw into her enchanted young-girl’s world. Her parents are mainly engrossed in themselves, their unresolved dreams and hopes and their problems. Anette goes back to studying at the university, Uwe fights for his business.

When Thomas, a former lover of Anette’s, moves in next door with his wife and child, the family comes under even more pressure. Thomas, a failed actor and mountaineer, is handsome and charming, and Nora is smitten with him. He stands for everything her father is lacking in: urbane manners, joie de vivre, self-assurance. Uwe, on the other hand, can’t stand his former archrival drawing all attention to himself, detests his nonchalent charme and his hyped-up stories.

While Anette has an affair with a co-student and Uwe breaks up with his business partner, Nora is swept up in her attraction to Thomas. At a neighbourhood dinner, the two men come head to head. The seemingly idyllic family is put to a severe test …