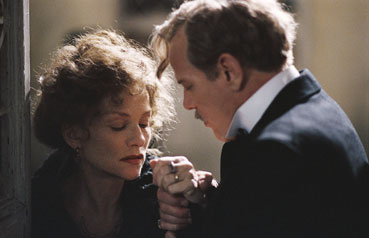 A house where people like to come. Long evenings spent listening, watching, laughing, saying one thing and then the other. That’s the advantage of a circle of habitués: everybody knows everybody. Outbursts of honesty, extremes of secrecy, moments of doubt and founded or unfounded joy .. it’s all there, to the guests’ delight and that of the master and mistress of the house whose lives are never-ending tales of success envied by others.

Suddenly, the smooth-running clock tells the wrong time. One day, someone leaves and is late returning. When the bell chimes at last, the world has drastically changed. One day, brought together in the house, a man and a woman see each other as they really are for the first time. One wanted this, the other didn’t. One wants to talk, the other doesn’t. It’s hard living in the same house when you don’t want the same things.