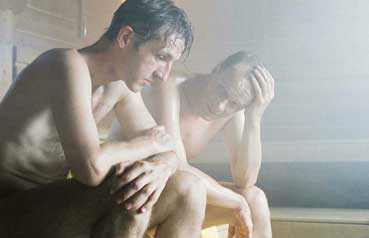 The characters in the film share two things: For one, the developments in Germany are changing their lives, and for the other, they all like going to the sauna. Toni is a long-term unemployed and impotent. He’s lost all his selfconfidence and is even afraid to return to his original profession. Karin has boisterously gone into business for herself selling useless stuff to all and sundry. Even in the sauna. Slowly she’s running out of friends.

Elitist stewardess Dani has been fired. Now she has to apply with a bucketshop airline and realizes that for the unemployed, different terms apply. Academic Monika who’s on social security falls prey to the plethora of possibilites. She just can’t make up her mind whether to marry and have kids or to teach sewing to women in Ruanda. Siblings Nadinchen and Jost are the owners of the Berlin sauna „Schwitzkasten“. To help her clients relax, Nadinchen massages them and herself basks in a sense of ever-lasting security.

But business dreamer Jost can’t keep up pretences much longer: Slowly, the sauna is running out of steam. Norbert is an expert on Goethe and writes speeches for his wife, a Liberal MP. In the sauna, amid normal folks, he finds out what it really means when the unemployed are given a going over. He decides to take the initiative himself. Our heroes realize that the government has left them in the lurch. Naked, they’re all equal. Only when they pull together can they all survive. Well, nearly all of them.