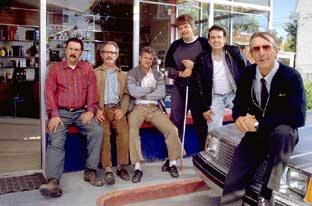 The Gaz Bar, a service station, is almost like a neighbour café where people come to hang out, chat, laugh, get a feel for what’s going on; it’s a place where they feel they belong. There are the regulars and occasional visitors. François Brochu, nicknamed „the Boss“, manages his business as best he can with the help of his three sons and his faithful friend, Gaston Savard. Unfortunately for him, his two older sons show no interest whatsoever in the business; to them, it’s a prison.

The oldest son, Réjean, dreams of becoming a photographer and travelling the world to capture images of evolutionary change. Guy, the second son, can think of nothing but getting up on stage and playing Blues late into the night. But the service station lies in a poor neighbourhood, far away from world events that need documenting and from Chicago’s south side jazz clubs. The youngest of the three, Alain, dreams of being independent. He wants to be a grown-up, starting with a shift in the café all on his own. But his father is hesitant, thinking the area is too tough to leave a fourteen-year-old kid in charge of the service station. Then a series of events threatens the daily routine of the service station …