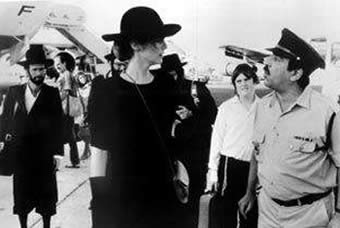 Nancy Callaghan is a New York yuppie selling insurance to support her husband, Jack, and unemployed lawyer and part-time drug dealer. One day, she just quits her job and ruhes home to tell Jack that they’ll go to Paris, just as they’d always dreamed of. But when she arrives in the apartment, she finds her husband in bed with another woman. So she packs her bags and departs for the city of her dreams by herself.

But having taken one too many valium for the long flight, she sleeps through Paris and wakes to find herself in Tel Aviv with no bags and no money. She is befriended by David, a local history teacher on reserve military service who drives her to a kibbutz where she can stay and work as long as she wants. Nancy accepts, unaware that her chores will include milking cows, harvesting bananas, scrambling a few hundred eggs and mucking around in cow pens.