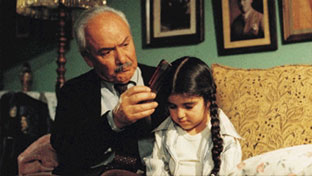 Hejar, a 5-year-old Kurdish girl, ends up with an uncle in Istanbul after her parents were killed in their village in clashes between government forces and Kurdish rebels. The uncle is also sheltering two fugitive rebels, and all three are killed when police raid the home. Hejar escapes by hiding in a cabinet.

Horrified at the extra-judicial killings, her neighbour – a 75-year-old retired Turkish judge – takes Hejar in while he tries to decide whether to hand her over to police or look for her other relatives.

The girl cannot speak Turkish, the judge speaks no Kurdish and strictly forbids the use of Kurdish in his house; even his Kurdish maid, Sakine, is not allowed to speak in Kurdish with the little girl. Very soon, however, her irresistibly sad little face (not to mention her colorful curses!) wins the old man’s affections – and mellows his attitude towards the Kurdish plight …