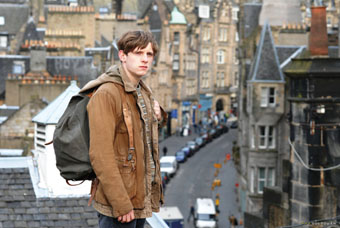 17-year-old Hallam Foe is a loner. Living on his father’s large estate, he has built himself a tree house from where he spies on his surroundings. At night, he roams about and stealthily watches his neighbors and family. Hallam is convinced that his stepmother Verity is responsible for his mother’s death by drowning two years earlier and desperately searches for proof for his suspicion.

After an unpleasant incident with Verity, Hallam is forced to leave home and goes to Edinburgh where he meets Kate, an hotel administrator who bears a striking resemblance to his late mother. Obsessively he follows her around town and manages to persuade her to give him a job as a kitchen porter in the hotel. Then he makes his home in the hotel’s clock tower from where he can spy on her …