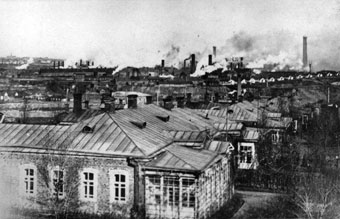 In 1929, Dziga Vertov shot the revolutionary film THE DONBASS SYMPHONY. Churches are destroyed with applause, crosses and domes are demolished, icons are burned. Flags are raised. Pylons instead of crosses, coal mines and steel factories are dynamically assembled. The new set of beliefs is only valid for that which is visible, and a new film aesthetic is genially and passionately established, at all costs. It is the first Soviet “talkie”, a masterpiece, a classic. But the Donbass region, a much-hailed Soviet legend, is in fact a British establishment: it was founded through the extraordinary pioneering spirit of the Welshman John Hughes, who came to the area in 1870 with more than 100 British engineers and with the concession of the Russian Czar. He tapped into local coal deposits and developed the steel industry in the Donetsk Valley.