I PUGNI IN TASCA 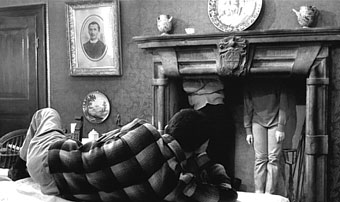 The mother is blind, three of the four children are epileptic, only Augusto, the eldest, is healthy and what is generally called “normal”. His younger brother Alessandro respects him so much that he decides to relieve Augusto of the responsibilty for the sick family and to kill everyone else in the house. First to go is his mother, then his youngest brother. He confides in his sister Giulia who is initially intrigued until, suspecting she may become the next victim, she renounces him. Augusto meanwhile acts in true patriarchal style and allows his underling brother to commit crimes that will be advantageous to himself.