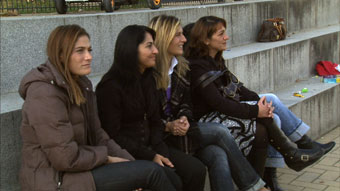 My first film about the Turkish girls’ football team MÄDCHEN AM BALL focused on the football field. There I met the girls from Agrispor: Safiye, Arzu, Türkan, Nalan and Nazan. They weren’t the girlfriends of the men’s team and they weren’t the girls selling sandwiches and tea on the sidelines. They were players and insisted that they be perceived as such, not as Turkish girls. Only then did they feel respected and would let themselves be filmed. They were young and full of dreams. The camera accompanied them in this easygoing phase, during which time their youth was coming to an end.

The second film, NACH DEM SPIEL, was about life. After school, after the game.

Now, ten years later, the “girls” are all young women in their late 20s. The football team no longer exists and a lot has changed, for them and the world around them. They sexy girls who got all the attention – supportive from the so-called multi-cultis and mistrusting from their fellow countrymen – no longer exist. Unemployment is high, the economic situation has forced many of them into positions they would rather flee from: wife, cleaning lady, kitchen help. Some are married, some are single mothers. Others tried to stand up to conventions and demand the same rights that men have, but failed. But all five keep trying to maintain a grip on their own lives.