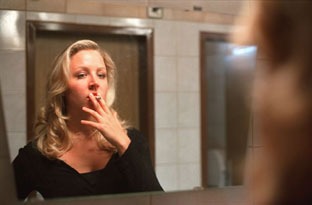 Only proof of Lena Schwan’s exciting lifestyle are the colourful postcards she sends to her sister back home in Hochleiten. Even though they’re mere illusions and she’s seen the big, wide world only in her imagination. Her cruise ship is permanently anchored on the Danube canal. And even the most tropical of beaches bears a Viennese stamp mark.

When Lena fled the narrowmindedness of her native village in the Tyrolian mountains she wanted to prove something to those who stayed behind. Now in her early twenties, her flight has turned into a series of defeats. Her chap has walked out on her, and with him she’s lost her job and her flat. All she now has is a letter from the mountains. Her grandfather has died, and on the spur of the moment Lena decides to attend his funeral. Because of him she once left her village, because of him she now returns …