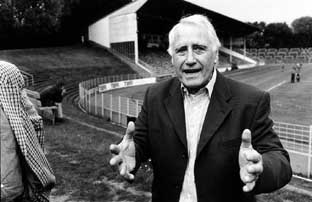 The Ruhr – the “Pott”, as the region is locally known – has always been different: it was dirtier, tougher, more controversial than the other German regions, but also more energetic. Up until the 90’s it was the workers’ housing estates, the smoky pubs, the allotments, the pigeon breeders’ clubs and especially the gigantic chimney stacks and mining towers that dominated the region’s image.

Here, people worked hard, protested, went on strike, had a good time and played football, football and nothing but football. For the people in the “Pott”, football was the saving grace amid the smoking chimney stacks, a symbol for life and fun. After the closure of the mines, the mining companies that sponsored the football clubs no longer exist. Without their support, many of the formerly famous clubs that dominated football until the 70’s faded into insignificance.