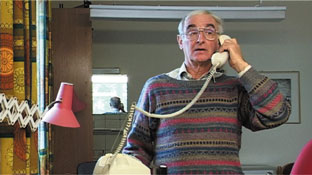 Gammesfeld sports a church, the village shop, a pub, the local fire brigade, 2 football pitches, a gravel works – and a famous bank. The Raiffeisenbank Gammesfeld is the last bank in Germany still managing without a computer. Bank director Fritz Vogt is secretary, accountant, cashier, farmer in one – and the most important man in the village. A film about a place where everything’s still alright with the world, about modern-day pigs, marriage and TV and especially about money.