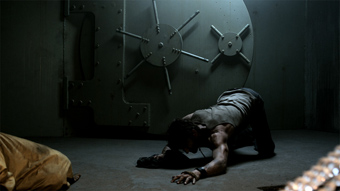 The cynical investment banker Mark Johansson wakes up on the floor of a locked and empty bank vault. His only companions are a locked steel cabinet, a swarm of flies, and a dead rat. Mark has no idea who kidnapped him, or how, or why. At first, he assumes that his buddies are playing a prank on him and dreams up retaliatory pranks, waiting to be let out.

Hours later, he starts to worry that he’s been forgotten. He makes noise to alert people in the building, but no one hears him. He is hungry and thirsty and furious. He manages to open the steel cabinet and finds some tools, but these tools have no effect on the hardened alloy of the vault door. He realizes then that he is in a struggle for his life. It is not a prank by friends, but slow torture by some unknown enemy. And he must face it alone. Childish tantrums and waiting will not save him.

He starts working on the wall beside the vault door. It takes all day to drill, burn and smash through the thick concrete and steel, narrowly escaping death by asphyxiation. Finally, he squeezes through a jagged hole in the wall. But on the other side, yet another surprise awaits him …