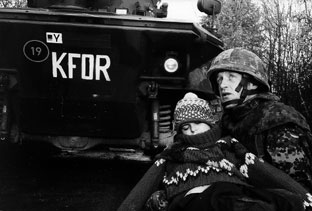 Fleeing from his past and the traumatic memories of his spell as a KFOR soldier in Kosovo, 30-year-old Paul arrives in a small town. Cautiously, he and his neighbour, Nele, start getting friendly. It’s the forsakenness of people who have lost their faith in love that attracts them to each other.

While Paul is unable to cope with the inhumanity he experienced, Nele, after the breakdown of a long-standing relationship, is forced to realized that her parents’ marriage, too, has been a mere facade. Very slowly, some kind of trust and friendship evolves between the two. But neither of them can envisage a relationship.

Everything changes when Paul is diagnosed as having leukaemia in an advanced stage. Only the knowledge that there is no cure for him helps them finally to address their feelings. When Paul’s health deteriorates dramatically, Nele “abducts” him from hospital to fulfill his final dream …