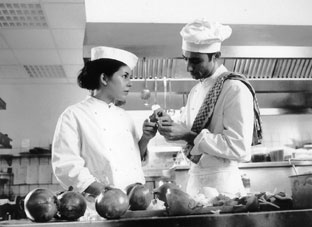 Johanna calls herself Jeanne and is fed up with school. She’d much rather study fashion in Paris. The only problem are the horrendous school fees. Not only is her mother dead against her daughter going to Paris, she’d also never be able to raise the money.

When, belatedly, Johanna asks for maintenance from her father, she finds out he is not her real father at all: her mother confesses that her natural father is a Turk, Cumhur, who has a family and runs a posh restaurant in Cologne. Financial pressure makes Johanna apply as kitchen help at her father’s place, not revealing her relationship to him. Very soon, she’s part of the Turkish family, especially since she knows Cumhur’s daughter, Idil, from school.

She feels quite happy with her new family, but should she reveal the truth, she’s certain there’d be no place for her. So she sticks to her original plan to steal the money for going to Paris from her father. When one night she puts plan to action, she is intercepted by Cumhur who meanwhile has been made wise by Johanna’s mother …