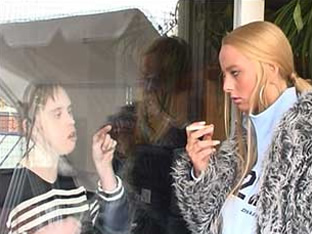 She’s the blonde bombshell of the backyards, the femme fatale of Wedding. She’s nothing but coolness personified, which might be mistaken for boredom – if it wasn’t for her toughness and her ability to get rid of enemies in no uncertain terms. And she’s no less determined when seeking fun. Until one of her joy rides ends in a crash. The court condemns her to welfare work in a sheltered housing project for disabled people. Which she finds a cheek. But the “normal people” she lives with aren’t exactly to her liking, either, and it seems as if, with the spastics, Kroko finally discovers something she’s been missing all along.