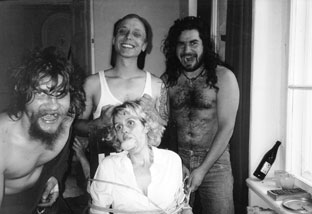 The film is based on an improvisation with the Berlin theatre “Die Ratten” – The Rats -, a theatre company of homeless people. The actors are street dwellers, ex-prisoners among them as well as anarchists, and the majority of them know violence, alcohol and drug addiction from personal experience. But they all turn out to be lovely people once you get to know them better. Theatre is their passion.

Rosa von Praunheim invited them to a castle in Mecklenburg, where in the space of a few weeks they developed and made a film: The story of a woman therapist who wants to help the “dropouts” but, due to her bourgeois background, merely tries to integrate them into society. “The Rats” end up taking her hostage and managing the castle by themselves. But their takeover will have unexpected results …