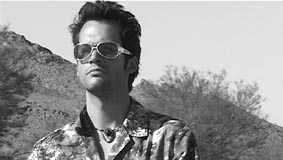 Los Angeles International Airport. We meet a man in his late twenties. He has only just arrived. Our traveller hires a car and makes his way to the next best cheap motel. The following day. Our protagonist wakes up in his motel room. He picks up the phone. On the other end, we hear a couple’s answerphone. He leaves a message – he’s arrived in L.A., all’s fine, the key’s lying under the doormat. He puts the phone down and gazes into space. All of a sudden, he grabs the phone and smashes it against the wall …