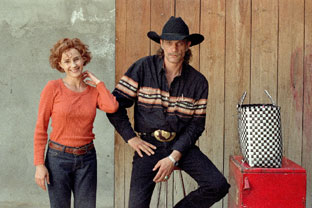 After a violent row with her husband who frequently beats her up, Christelle, a hairdresser, takes flight. She ends up in a delapited motel called “Le Galaxy”, frequented by truck drivers and travelling salesmen. Mona, the owner, an ever helpful and lively widow, takes Christelle under her wings and helps her to take a new interest in life. They both become passionately devoted to the TV soap opera “The Ranch of Love”.

Then Christelle has to deal with her husband’s return. But thanks to Mona and her new surroundings, she discovers her creative talents. She meets new people and for the first time experiences sensuality, desire and love in the arms of Lucien, a young truck driver. Torn between her longing for independence and her new amorous commitments she becomes a peripatetic hairdresser roaming the countryside… until the day Mona, Lucien and the final episode of her favorite TV series open up unexpected horizons.