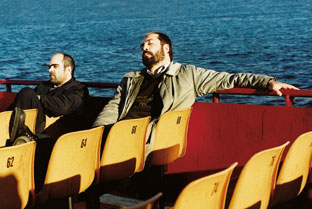 Vigo, a harbour on the Spanish Atlantic coast. Day in, day out Santa, an unemployed docker, and his ex-colleagues catch the ferry into town. There’s Lino who unsuccessfully spends hours in anterooms of personnel departments, defiant and nervous amid youthful competitors. José, the youngest in the group, who’s having a hard time coping with the fact that his wife, Ana, earns the money for their upkeep. Amador who hardly ever leaves his place in the bar of their former colleague’s, Rico. And Santa, the immensely charming rebel and big-mouth who refuses to accept the fine for a street light that went bust during protests against the docks’ closure.

Every week they join the queues at the employment office, meet for a drink at Rico’s, talk about the old and the new times, about life, what it’s like now and what it could look like. What happens if nothing happens? Then the void will come to a head …