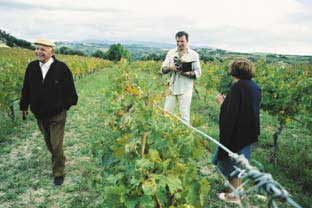 Across three continents, MONDOVINO weaves together the family succession sagas of billionaire Napa Valley power brokers, the rivalry of two aristocratic Florentine dynasties and the efforts of three generations of a Burgundian family fighting to preserve their few acres of land. But are all these struggles secondary to the exploits of a gleefully mischievious pirate from Bordeaux who spreads the gospel of modernity from Italy to New York to Argentina?

Wine has been a symbol of Western civilization for thousands of years. Never has the fight for its soul been as desperate. Never has there been so much money – and pride – at stake. But the battle lines are not what you’d expect: local versus multinational, simple peasants versus powerful captains of industry. In the world of wine, it is never the usual suspects.