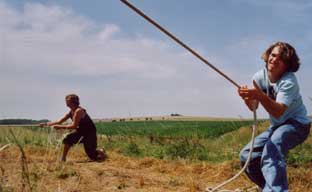 Ben is holidaying on the canals of North-Eastern France France with his best friend and his family – on a houseboat, of all things. To him and his friend, being in the bosom of the countryside is nothing if not boring. Lisa, the mother, feels the same. Her husband is fully occupied with this holiday’s task – catching a pike. In the presence of Ben, 20 years her junior, Lisa experiences an ease she gives in to for a short time. In unguarded moments, she and Ben experience an intimacy that changes not only the two boys’ friendship.