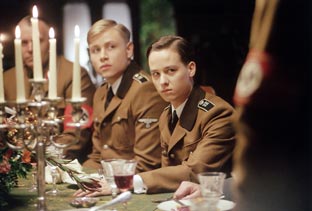 Germany, 1942. Hitler’s regime is at the height of its political and military power. 17-year-old Friedrich Weimer from the Berlin working-class district Wedding is a promising young boxer. Due to his talent, he is offered a scholarship for a national political school, NAPOLA Allenstein, where the future élite of the pan-German Reich is being educated.

Seeing a possibility to overcome the class barriers, Friedrich applies at the ancient order castle, against his parents’ wishes. As soon as he’s entered the new world ruled by strict national socialist discipline he encounters tough rivalry and unexpected comradeship. Eventually, a brutal sortie against escaped POWs and the developing friendship with quiet, sensitive Albrecht Stein, the Gauleiter’s son, confront him with a choice that will also mean the end of his youth.