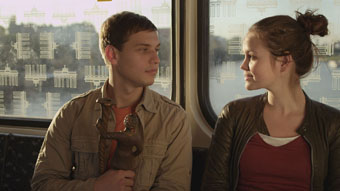 The young Russian-German Dima, torn between a new love and his criminal past, is fighting for a new lease on life in Berlin. “Nemez”, as he is called by his boss, the art thief Georgij. “Nemez” is Russian and means “German”. Since his release from youth detention, Dima wants to start a new life in Berlin. But he cannot shake off his past that quickly: Georgij doesn’t want to lose his services and Dima’s father, who has never really felt at home in Germany, wants nothing more than to return to Russia with the whole family. The only thing that gives him any hope is his love for Nadja, an art student. But his criminal past still has a firm grip on him and threatens to jeopardize their fate. Dima has to put everything on the line to find his path to himself.