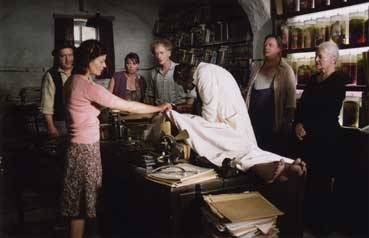 Dunkelhäuser is a somewhat strange village somewhere in Germany. Farmer Beutel goes about his daily work naked, farmer Jockel dies temporarily. Their cow feeds from the gutter. The farmers toil away bravely. Milan, the only young man in the village, sees a mysterious being in the lake, and the Pole’s heart, who appeared out of the blue in Dunkelhäuser and immediately was found hanging dead from a rafter, won’t stop beating.

Milan decides to leave and go in search of love. In the woods, he happens upon Ilonka, a beautiful young and energetic Polish woman looking for her lost Polish boy-friend, and trails her back to the village to protect her. The two become allies. Now that love has finally reappeared, Dunkelhäuser’s gloomy past turns into the future. The Pole’s heart, redeemed, falls silent, the dead farmer opens his eyes, and the naked man punishes his saucy wife with passionate sex. Out in the deserted fields, potatoes are finally planted again. Milan and Ilonka leave Dunkelhäuser. All inhabitants take their lives in various ways. Finally into hand.