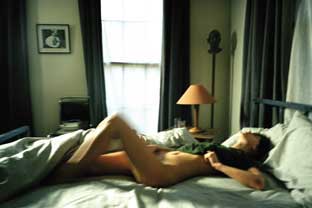 As Matt, a member of the British Antarctic Survey team, flies across the “continent of ice, a place where no man had been since the 20th century”, he recalls his first meeting with Lisa, an American student,,at a rock gig at the Brixton Academy in south London. The attraction is immediate. They fall in love. Their affair is passionate, tender, intensely sexual. They make love, take in a rock concert, make more love, take in another rock concert, make even more love, and occasionally pause for food. One year later, they part forever.