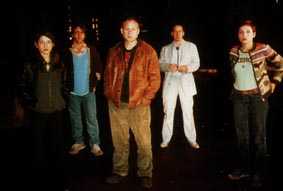 An armored truck is robbed. The loot: 30 million. On an underground platform nearby at 12 past midnight: five “normal” people, each carrying a bag: Frank, the unemployed hot head and gambler; Kathrin, the harassed waitress and single mother of two; Martin, the apathetic cleaning-gear salesman and family father; Jonas, ex war photographer turned cab driver, and Marie, the beautiful computer programmer on the verge of rediscovering her own sexuality. “Arrest them”, says Ben, the chief inspector, to his four younger colleagues.

But after a relentless interrogation, each suspect on their own, the five police officers seem undecided: an unlikely lot to have committed this perfect crime, or is it exactly that which makes them prime suspects? Ben’s verdict: “Let them go, but keep an eye on them …”