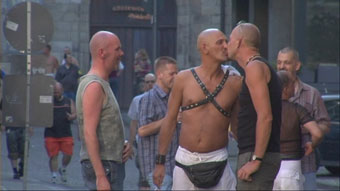 Over the last ten years, the rate of new HIV infections has risen drastically to its present rate. There are approximately 2.500 HIV-positive people in Cologne alone, the number of unreported cases is estimated to be twice that figure. Yet despite individual attempts here and there, it’s still a no-no to talk openly and frankly about HIV in our society. The film centres on two gay men in Cologne who were tested HIV positive. Over the course of a summer they give profound insights into the private lives they lead with the infection and talk about taboo topics such as sex with HIV and barebacking (unprotected sex).