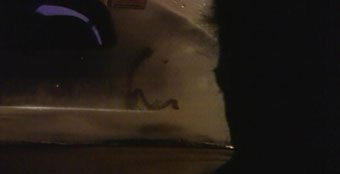 Pasolini’s death: A murderer. A confession. Years later: a revocation. The legend lives on, and all questions seem to be open.

A stranger entices with explosive details about the murder. At the Ostia soccer field, the scene of the alleged crime, neither the geography nor the sequence of events unfold. The cone of light is too weak, and the stranger is not willing to disclose the truth. Ultimately, nothing is determined. The legend lives on.