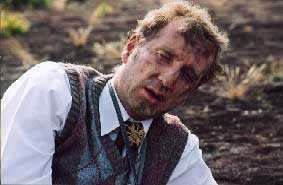 On October 3, 1942, the first rocket took off into space. The Germans had no idea they had launched the birth of a spirit – the rocket’s spirit, Bianca, who has seen things she would like to share with us, but she cannot meet up with us. The veil is not transparent. All we can see is Bianca’s search during which the myth “rocket” unfolds. We experiece the Germans‘ fascination with this object of an autonomous, living technique which starts leading a life of its own.