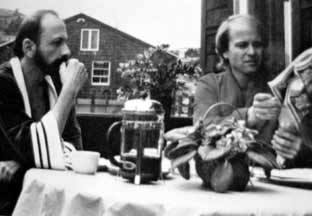 RECENT SORROWS begins with the simultaneous shattering of two men’s love affairs — one straight, the other gay. Tim has walked out on Katherine after finding her in bed with a younger man. Victor, possessive and longing for commitment, has been thrown out by his older lover, Neal. Both Tim and Vic seek solace in a café, where Vic overhears Tim confiding in a friend about his breakup with Katherine. When Tim leaves, desperate and a little drunk, Vic follows him home. Though they are strangers, he manages to talk his way into Tim’s apartment.

Once inside, Vic claims to be a recruiter for the devil, willing to return Katherine in exchange for Tim’s soul. Angered, Tim suspects this is just a tasteless prank and demands that he leave. But what appears to be a “prank” leads to murder.