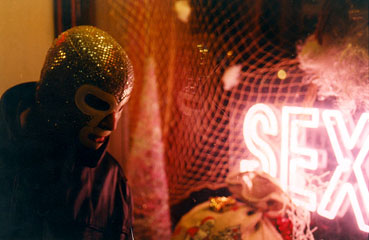 This is the true story of the last hero. This is the story of Santos. This is the song of Santos. The dream, the trance, the dance of the subconscious. It’s the child’s journey, the punk’s, the leftover’s, the abandoned person’s journey in the abandoned city of Berlin or anywhere. Trapped between night and day, between yesterday and no future. When meeting creatures like himself – the dwarf, the cowboy, the dead pig –, Santos pretends there still are heroes in this forgotten world. Fighting nobody, Santos performs heroic deeds no-one needs. But Santos fell to earth deprived of his supernatural powers, forgoing the reason for his existence.