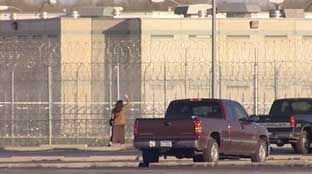 The documentary attempts to present the topic from a rather specific point of view, approaching the subject from the committed protagonist’s personal perspective. The primary interest lies in Ursula Corbin from Switzerland who is opposed to death penalty on principle and who, on a personal level, is involved in fighting for its abolition. Through letters and visits she has established close personal relationships with several prisoners, especially one inmate of death row in Livingston, Texas, thus bringing an element of humanity into an inhuman system.