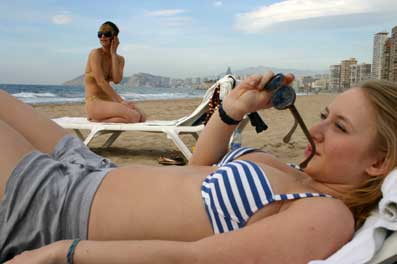 In a fit of sisterly love, Anne, a career-minded music producer in her early 30’s, promised her little sister, Marie, a trip to Benidorm as a birthday present, even though the two are not that close. Considering the planned abortion that she keeps secret from her lover, Philipp, and the usual pressure at the record company, going on a holiday is the last thing she needs. But the trip’s booked, and so the sisters take off for Spain.

Slowly, Anne and Marie grow closer and realize they never saw each other as they really are. Marie discovers that her big sister in fact is an unhappy, bitter woman who merely hides behind the façade of self-confident go-getter.

The two sisters get at each other, though not overtly, especially when Marie falls in love with Max whom Anne brought along in a tipsy mood the very first evening. At the same time, Anne’s relationship with Phillip starts breaking up. Desperately, she tries to ward off her growing frustration, but her tense activities estrange everybody even further.