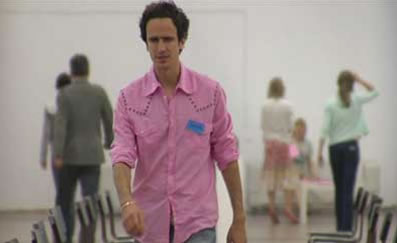 „…you can’t get me any different. I’m the adventure trip, not the package holiday…“ 18 Munich singles take part in a “speed dating”, a “meeting event” where two strangers are allowed precisely five minutes to get to know each other before being introduced to the next stranger. In the race against time they try to sell themselves as best they can, all the while sizing each other up. Nine women meet nine men. They’re all from Munich, they’re all looking for a partner. That’s all they have in common.

They talk about cappuccino, avalanches, consumer behaviour and allergies, about public transport, soot filters for diesel engines, fruit crates, fertile and infertile days, bargains and designer gear and loneliness. There’s no time for being squeamish; after all, the whole thing’s about finding the love of your life. A portrait of the 30-something singles’ generation – in Munich.