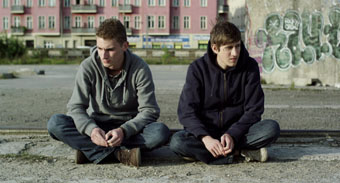 Marlo, who claims to be visiting his girlfriend, wanders through the streets of Berlin and meets up with Kirill. He starts following him which seems to impress Kirill. A strange relationship develops between the two. The more Kirill discloses about himself, the more confusing he appears to Marlo. They float next to each other, not knowing what the next step might be. Is there really someone to talk to in this weird world? Someone who is just as bewildered by it all? And wouldn’t this person inevitably have to be just as weird?