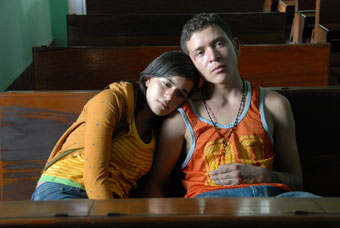 Tapachula/Mexico. Violence is a part of everyday life for the gang Mara Salvatrucha. Casper, just a teenager, is a member of the gang and is trying to hide his desire for security and love behind a tough façade. He mercilessly recruits and initiates other young boys, like the 12-year-old Smiley, to the gang. But when the gang boss finds out that Casper has a girlfriend, his fate takes a turn for the worse. Things get out of control and Casper is on the run.

His fate leads him to Sayra, who together with her father and her uncle, is also traveling by train through Mexico to the USA. Sayra senses that Casper is in danger and helps him in his flight from the Mara. An adventure begins that welds the two together and marks the beginning of a tender romance with an open end …