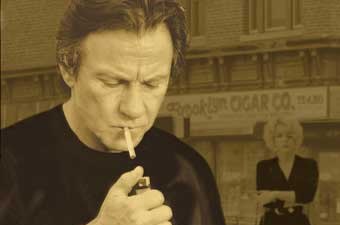 For Auggie Wren, his store at the corner of Third Street and Eighth Avenue, the Brooklyn Cigar Co., is the centre of the universe – so much so that every single morning he takes a photograph from the other side of the street. These photo albums he shows to Paul, a writer and regular customer, who comments on the fact that the pictures all look the same. “They are all the same,” Auggie agrees, “but each one is different from all the others.” Until Paul recognizes someone in one of the photos: his wife, Ellen, who was pregnant when she was shot and killed one morning on the street outside the store. Which causes Auggie to reflect that, had Ellen not given him exact change that morning, had something slowed her by just a second, she would not have walked into the path of the bullet.

One day after buying his ration of Te Amos at the store, Paul is walking absentmindedly down the street when he almost steps into the path of a truck. He is pulled back and saved by a young black man named Rashid Cole. In gratitude, Paul offers to put him up for a few nights. Rashid’s on the run from bank robbers he relieved of $5,000. Although the young man initially enervates Paul with his liveliness, he also cheers him up. And then Auggie’s girlfriend, Ruby, from eighteen years ago materializes out of the blue and informs him that he’s the father of a crack-addicted, pregnant daughter named Felicity. And Rashid turns out to be another lost child: After his mother’s death years ago, his father disappeared, and now he tracks him down to a small-town gas station …