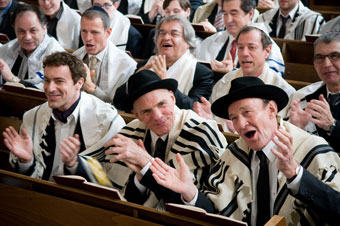 Jil, a thirtysomething, attractive, hard-working but also romantic accountant, really wants to find the man of her dreams. But then there’s her crazy Jewish family – including her widowed father Benno, her sickly grandfather Zaide, her uncle David and her aunt Sarah – who all want to decide her fate and marry her off.

Character, looks and profession, none of that really matters. The only thing that matters is that her future husband be Jewish. When Jil meets Marc, a landscape architect, she falls head over heels in love and destiny takes its course. She is afraid to tell her family that Marc is a “goy” and pretends that he is in fact Jewish. With the help of her Hasidic lesbian friend Zippi, Marc takes a crash course in Judaism. The result: the big family “Shabbes” dinner turns out to be a huge success and everyone just loves Marc.

But Jil and Marc continue to be confronted with prejudices, even in Marc’s family. When Jil’s cousin Netty and her husband Micky invite not only Marc, but also his parents Frederike and Ludwig to their son’s bar mitzvah, catastrophe strikes and their cover is blown. It seems tradition is stronger and Jil breaks up with Marc. Everything appears to be over …