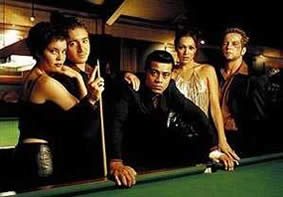 Thomas, Jack and Wayne are the best of mates. Together they’re the stickmen, playing an on-going stake game of pub pool that sees them touring the dark underbelly of Wellington’s pub scene. Each of them lives their life the way they play pool. Thomas is either “on” or “off”. His game can be one of two things – absolutely brilliant or absolutely crap. Jack is always slick, cool and forever setting up the next shot. Wayne is, well, Wayne. He bumbles his way through life happy to be the guy that always says the wrong thing at the wrong time.