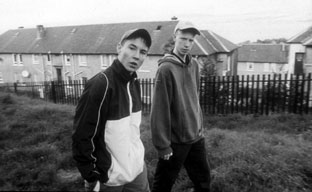 Liam is a tough fifteen-year-old who has grown up on a council estate in a run-down industrial town near Glasgow. He imagines a better life and takes pleasure in looking up to the stars through his telescope, to where his dreams lie.

His mother, Jean, is in prison but only has six weeks left before her release. In thinking forward to that day, Liam sees a holiday chalet for sale which he considers as an ideal place for them to live. He tells his best friend Pinball about his plan and sets out to earn enough cash for the deposit – by stealing drugs from Jeans bullying boyfriend, Stan, and selling them.

But Liam knows he will need more money and, together with Pinball, gets involved in something much bigger: deals with the hard-nosed drug dealer, Douglas, who is impressed with Liam but wants Pinball “to be dealt with”. With almost enough money in his hand, Liam goes to visit the chalet and is devastated to find that it has been torched …