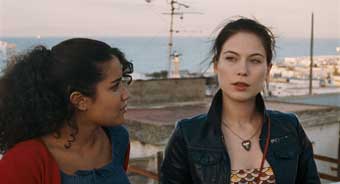 Tangiers, Morocco. Amira lands on the street after her family throw her out because she would rather become a dancer than be married or work as a housekeeper. She moves in with some friends who make a living as prostitutes. Pia and Tom, musicians from Germany, meet Amira in a disco. Pia is fascinated watching Amira dance. The three become friends, but Amira sets her sights on Pia’s boyfriend Tom. Pia thinks that maybe a love triangle might just liven up her troubled relationship with Tom. But Amira sees her big chance in an affair with Tom.